No new stuff for a long time

It has been a while, ever since the Z400 blog things have wound down a bit. I did make a turret a year ago, but since then I have not shared much. This is to do with projects taking much longer than expected, and this being weird times.

For powder printing my biggest limitation at this point is not the printers, it is the powders. My idea was that a tiny (12x40mm) printer would easily allow me to test powders, not requiring me to make giant batches of powder to test. This tiny printer took WAY longer than expected, sapping time for over 3 months. After that, it still did not print great. I do now have a small batch printer, and the knowledge to modify printheads to CISS.

A bigger issue is to do with different people being good at different things. I am an engineer. I am good at building things. As it turns out I am not great at developing powders. It is just a struggle for me to keep going, and to keep a path towards a goal going. I will keep attempting in the background, but I have decided that I will either try shared recipes or just buy powders for the foreseeable future. Obligatory link to forum thread: https://ytec3d.com/forum/viewtopic.php?f=8&t=8567

Another project that ended up taking a lot of time was an animatronic tentacle (you heard me). For Hackerhotel 2020 I had a small mockup of the mechanism. It received a lot of attention at the event, even getting a mention at Hackaday (https://hackaday.com/2020/03/06/from-hacker-hotel-2020-badges-sharks-tentacles-old-school-hacking-and-much-more/)

I decided that I would make a more actuated version with some improvements. I hoped to be done somewhere March/April. We are now Juli and I now hope to be done before Bornhack 2020. I will share it, and it will be awesome, but it took a ridiculous amount of time. Obligatory teaser image below.

Boardgame with self moving pieces

And now for some future projects. 2 years ago I was working on a boardgame that could move it’s own pieces. The idea came from me playing a game called Roborally, where the moving of the pieces took the most time. If we could automate that in the most over engineered way possible, we would have a cool looking board that did the annoying stuff for us. At the time I was running into issues with reading the game cards. After I got a new apartment and had to move, the project kind of ground to a halt.

After summer holiday when the animatronic tentacle is published, I will continue work on the board. I will look if I can redo the cardreader, and if that fails I will see if I can find another reading principle. I might redo the electronics, since the Arduino Mega is currently bottlenecking me, but I’ll cross that hurdle when I get there. Obligatory video of board pieces moving below.

The last item on the list is to do with the mini powder printer mentioned above. I bought new powder for my printers. I have Oasis, and I have a Z400 both gathering dust. A friend pointed me to Tethon3D, which sells ceramic powders for 3D printing. Since ceramics was a goal for me anyway, I bought a sample. It is a bit spendy, but cheaper than some other binderjetting powders I have seen. It is currently being printed in Oasis, getting the settings correct. When I finally have good strength parts, I will print some parts to be fired. Hopefully before the end of the year I can print parts that do actual work. Obligatory link to a log i keep here: https://ytec3d.com/forum/viewtopic.php?f=8&t=8921

I can finally pick up where I left. Hello to the dozens of people that click (and maybe even read) this page.

I have moved, and now live in the gorgeous Enschede in the east of the Netherlands. I got a new job in this area, and driving the distance every day was not an option. It took me a while to get properly settled (especially the internet, which took a full month), but I am now at a point where I can pick things up again. This means that there will be more projects again.

The first thing I did is already public, a new clock. A clock was missing here, and as a tinkerer, I just had to build one myself. It also marks the ‘I am moved in’ point. First a small tour of the house. I now live in a one room apartment. This is a challenge, because my bedroom is my living room is my workshop, but I made it work. This is where I will do most of my projects, notice how my workspace is under my bed: 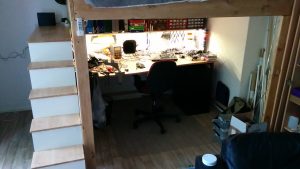 Where I will do my work 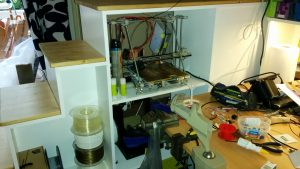 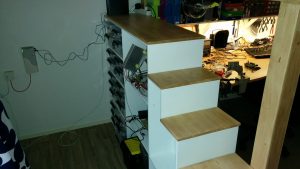 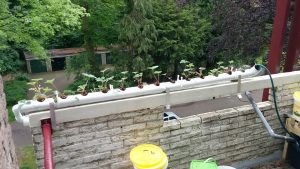 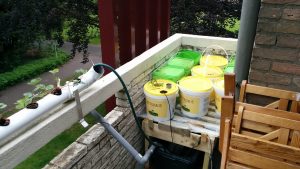 Dutch buckets, to be filled 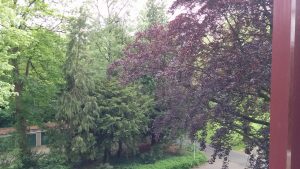 And just look at that view

I also haven’t been standing still with my hydroponics. I did have the small setback of moving, making the greenhouse I built useless to me. I did manage to get a full setup running on my balcony, which is starting to pick up. I have dutch buckets growing tomatoes, pepper, zucchini, melon and I have a NFT tube growing mostly strawberries, but also a bit of lettuce in the future. Right now, it is controlled by 2 digital timeclocks and some willpower, but with this is the setup I will fine tune my hydroponics controller.

The hydroponics controller also had a setback. I started last winter, with an Arduino Mega powered hydroponics controller, with tons of features, and a gorgeous graphical display. Then, when the winter came and the project slowed down a bit, I had an epiphany. People who run hydroponics don’t need a controller with tons of features capable of running a commercial sized greenhouse. They need something cheap and simple. I have binned the old controller mostly, and started from scratch with an Arduino Uno, and a smaller, simpler shield. The interface is simpler, using only a simple 2×16 display, and the features are a bit more limited. The biggest challenge now is fitting all remaining features on the tiny programming space of the Uno. I am at 31% of the programming space, with EEPROM, outputs, PH, EC, temperature, environment and water level remaining.

The information on the Hydroponics page of this site is now outdated. I will see if I can change it some time soon. 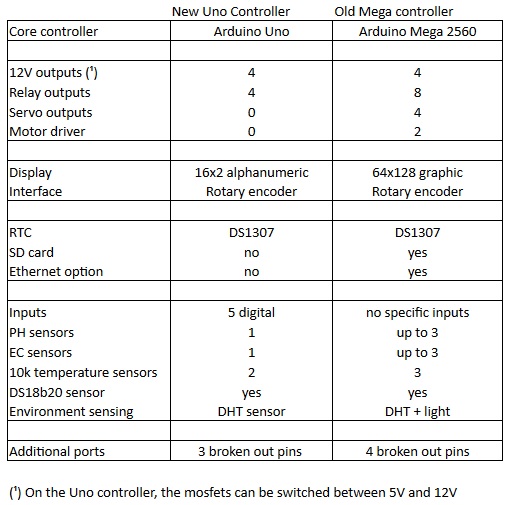 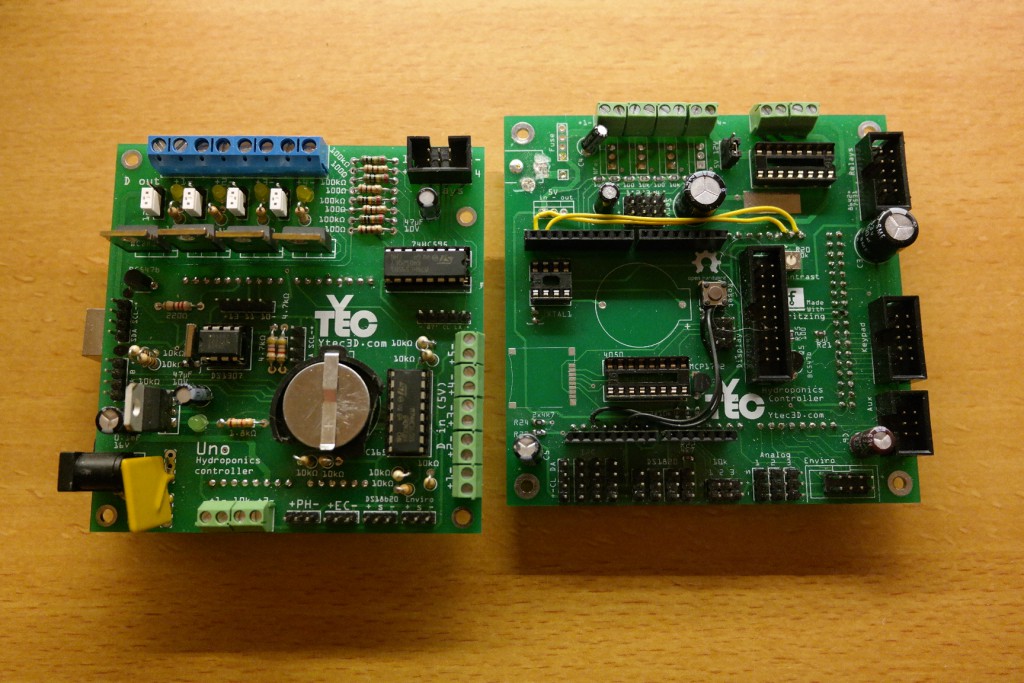 On the left, the new one, on the right, the partially stripped old one. 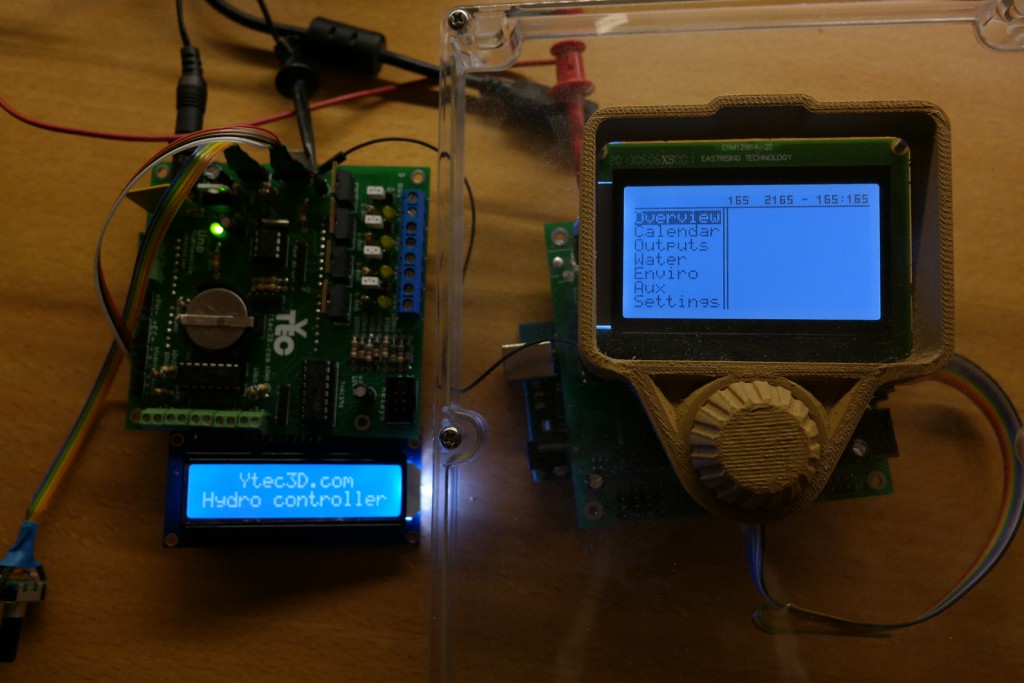 The difference in GUI, going from a graphic lcd to a alphanumerical one

Plan B has been starting and stopping for the past year now, but no real progress has been made. Part of this is me not being the guy to experiment with materials, part of it is me having other interests, and part of it the biggest bottleneck of 3DP printing, the printhead. The thing I have been working on is a faster controller, based on the DUE, but since the last post, nothing has happened to that. I hope to make a controller that I can sell kits of, but design on the PCB has stalled for various reasons. I hope to finish work on the new controller when I finish the hydroponics controller and when the makerfestival this weekend is done.

I have also done a lot of conceptual work and concept tests on the next printer, Project the 3rd. The keywords will be cheap and updatability. It will be a cheap platform for the technique to grow on. Plan B was like the Darwin of Reprap printers (clunky and limited, but working), I hope to make the 3rd like the Mendel, so the 4th can be full color by default. Work will not start on that for months, but the staring point is a printhead I have had here for a month or so now.

There is also a side project I have been working on. It is labeled a low priority long term project, meaning that it will progress very slowly and with no rush at all (unlike the clock). It is the Laser Rifle from fallout, 3D printable and with working reloading mechanism, sound and laser. I have about 30 hours in the design so far, and shape wise it is mostly done. I only need to design the reloading mechanism and optimize for 3D printing. Designing is going to take at least 10 more hours. Printing is currently estimated at 50-80 hours and 2kg of plastic, painting at 20 hours. It may still take months to complete, it having no priority and everything, but I hope to finish this one. It has been requested and next to the Pip-Boy, is the most popular Fallout prop. Plus, it would look wicked mounted to my wall together with my laser pistol. 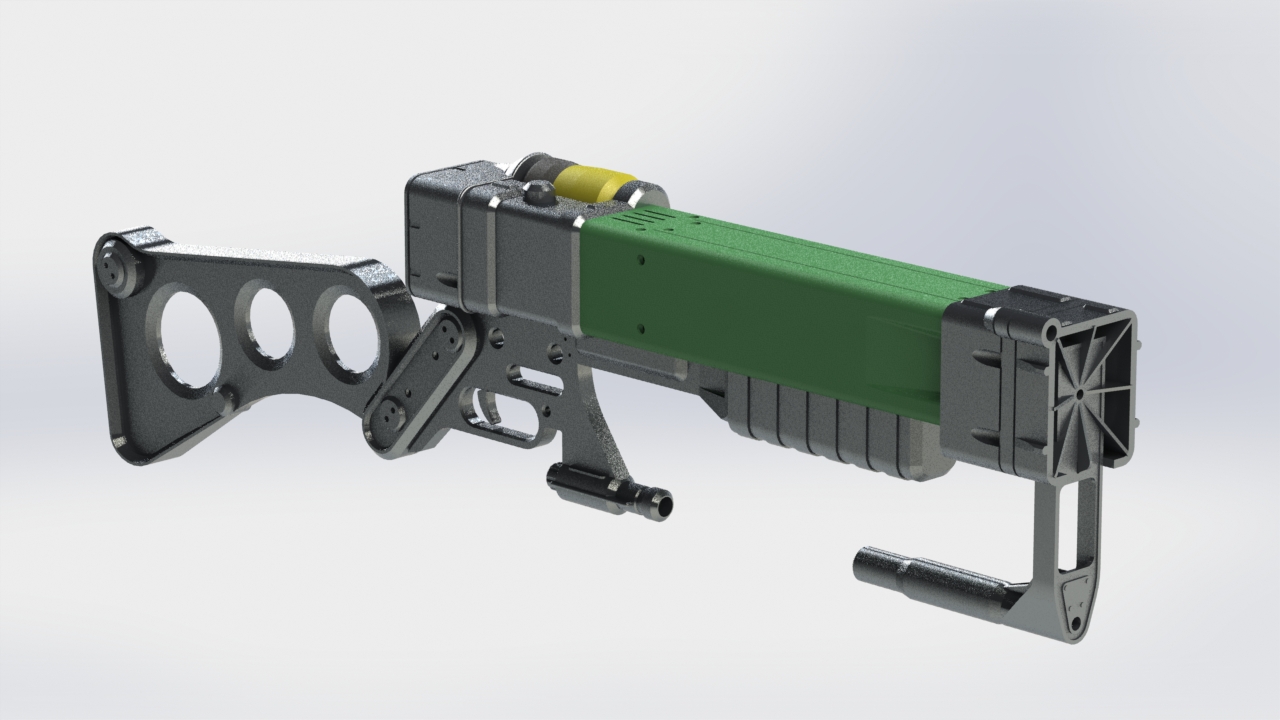 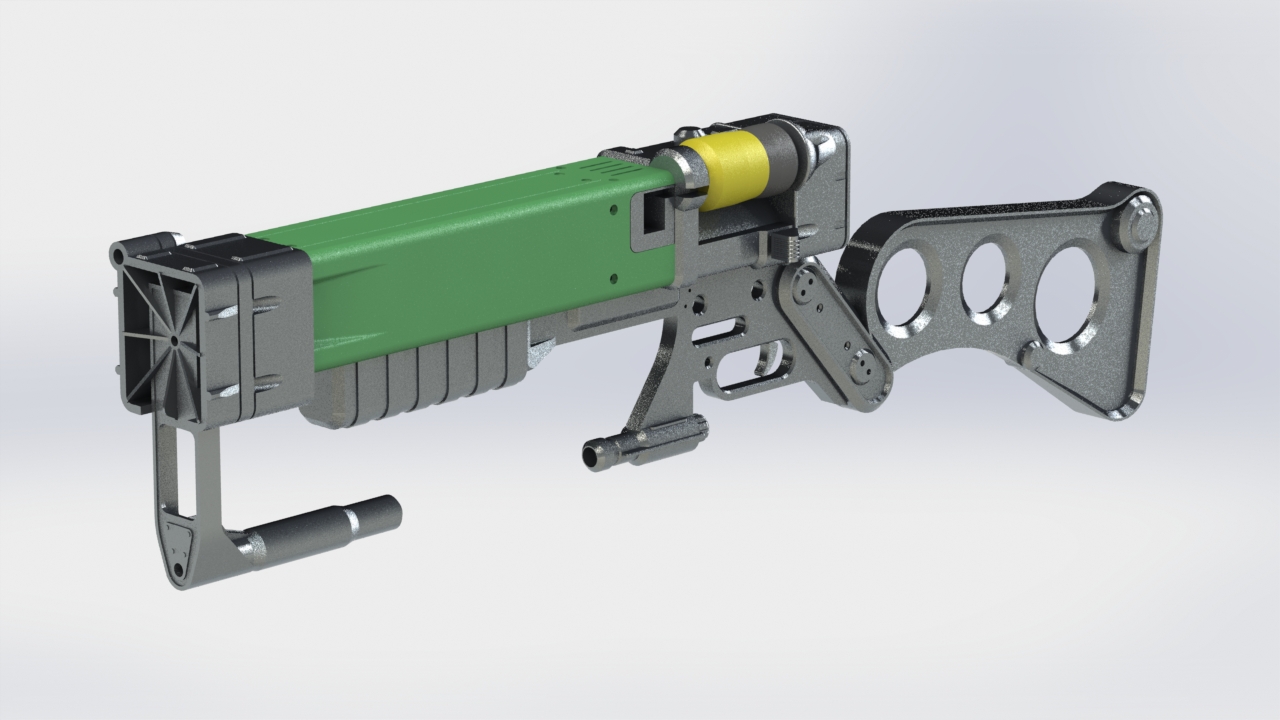