After assembly Plan B needs to be wired. This is can also take a day, there are quite a few wires and connectors to be made. Motors, endstops and sensors are wired with ribbon cables. Heaters and power supply are wired with wires of around 1.5mm². The megatronics V3 board needs to be configured. There are several headers to adjust microstepping and power supply. The header for the power supply is located near the USB port. It toggles between powering the board from the USB port and powering it through the power input. For microstepping, every motor needs to be configured for a certain value. These values are all quarter steps, or the only the middle header connector, as shown in the picture.

Use heatsink plaster to glue the heatsinks to the A4988 stepper motor drivers. Plan B doesn’t need ridiculous amounts of power, but the driver will still get warm. To adjust the drivers (done when everything works), turn the tiny potmeter counter clockwise and turn the motor on. Then keep turning clockwise until the motors no longer lose steps. Then turn the potmeter by another 15 (ish) degrees for safety. If you hear the motors skip while the printer is printing or moving, turn the potmeters further clockwise, the motors are not receiving enough power.

To connect the Keypad and LCD screen, go to the documentation. There is no simple way to show how these need to be connected, so going to the pin mapping might be the easiest thing.

The firmware tells which connector goes where, but the image hopefully clears up some remaining mysteries. 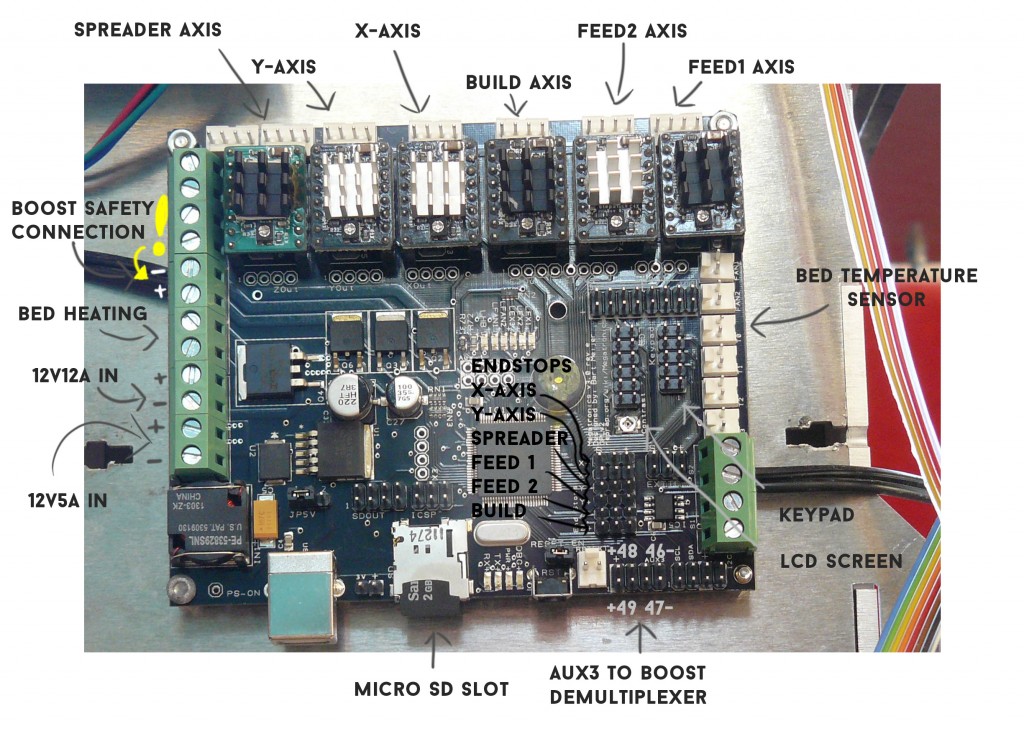 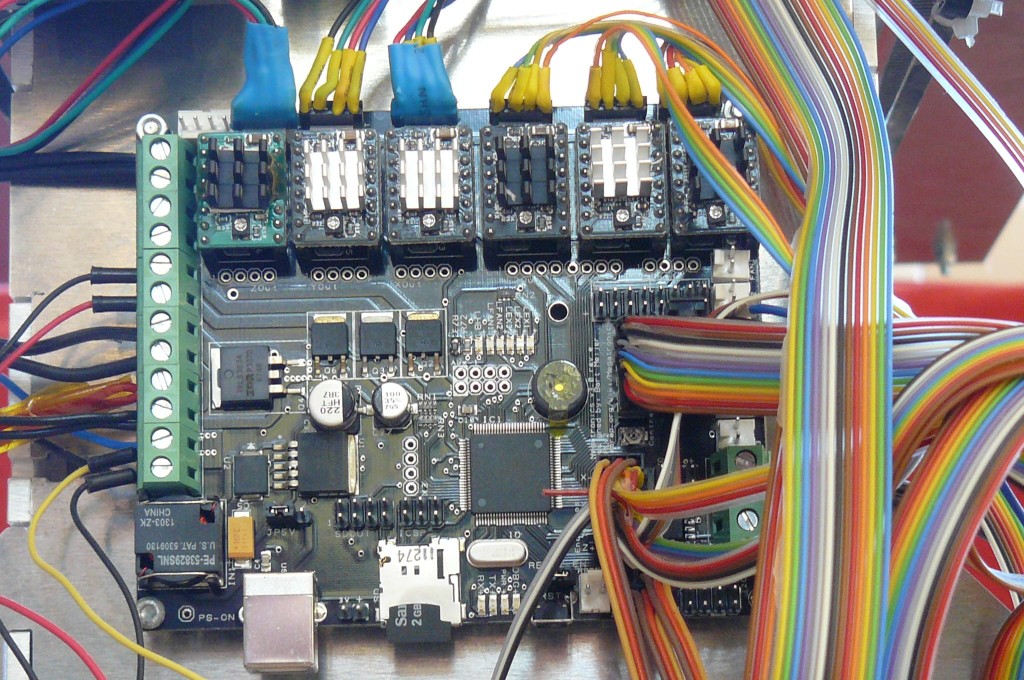 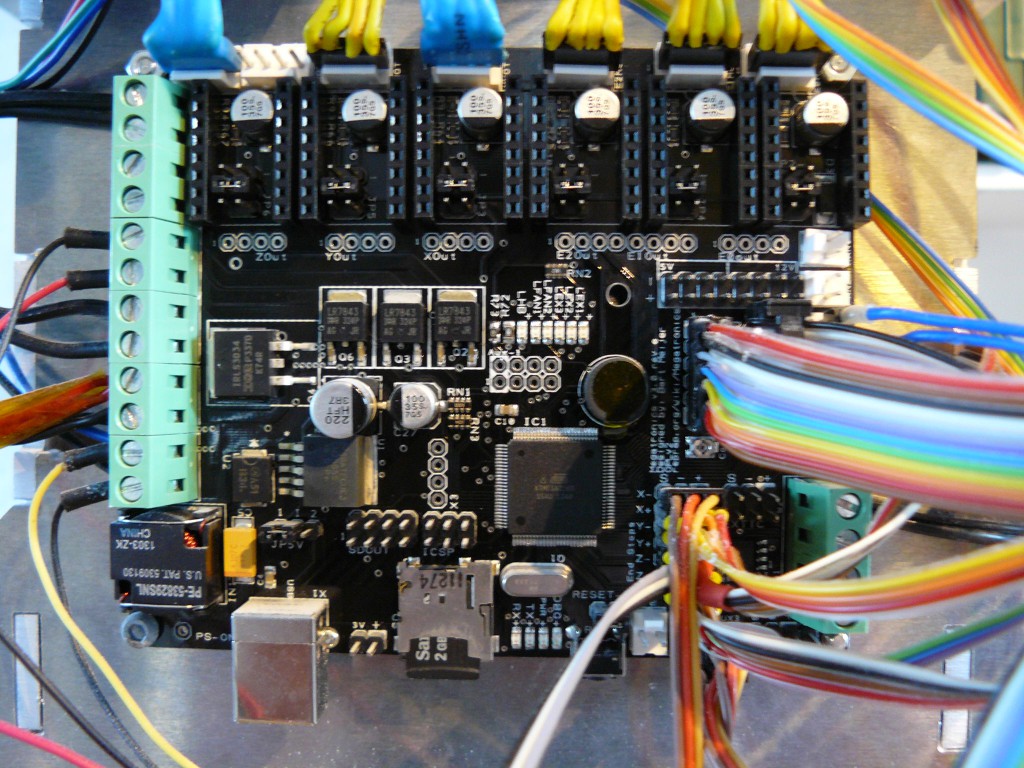 Under the printbeds are heating resistors. These are used to heat the printing powder to make the parts stronger and printing more stable. The resistors are aluminum housing 2.2Ω 25W resistors. They are soldered in 4 parallel pairs of 2 resistors in series. 1 Set under each feed piston and 2 pairs under the build piston. The resistors are glued on the underside of the piston using heatsink plaster, that I also use to glue the heatsinks on the stepper motor drivers. Fairly thick gauge wire (around 1.5mm²) connects the heating resistors to the Bed heating port of the Megatronics. 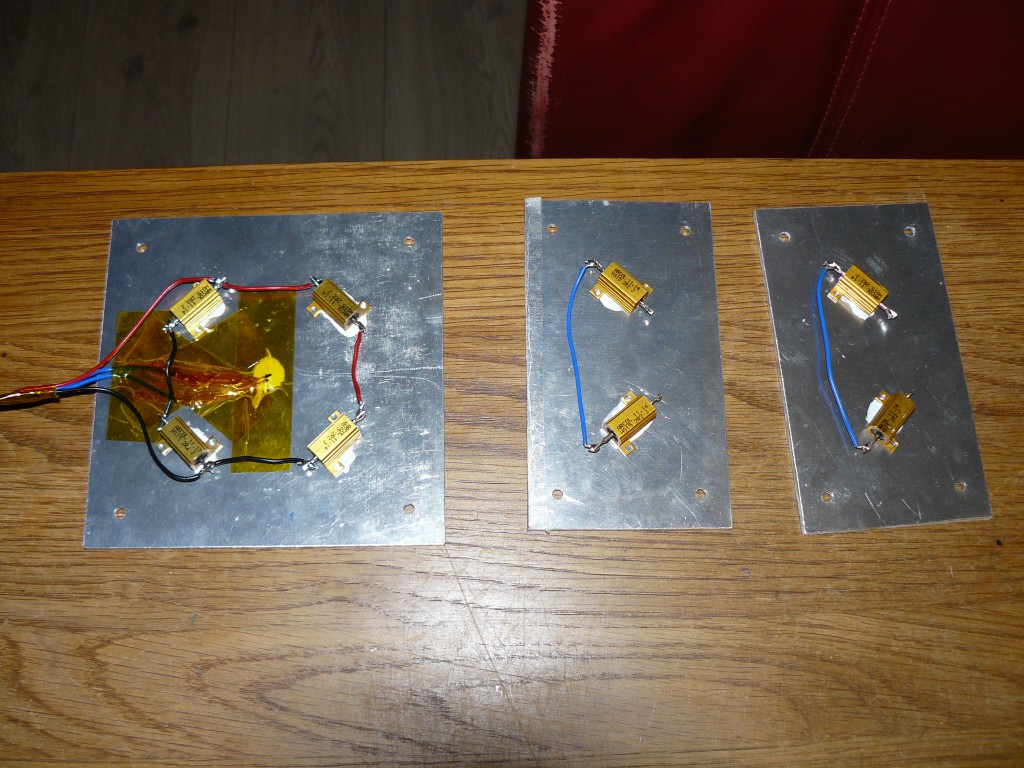 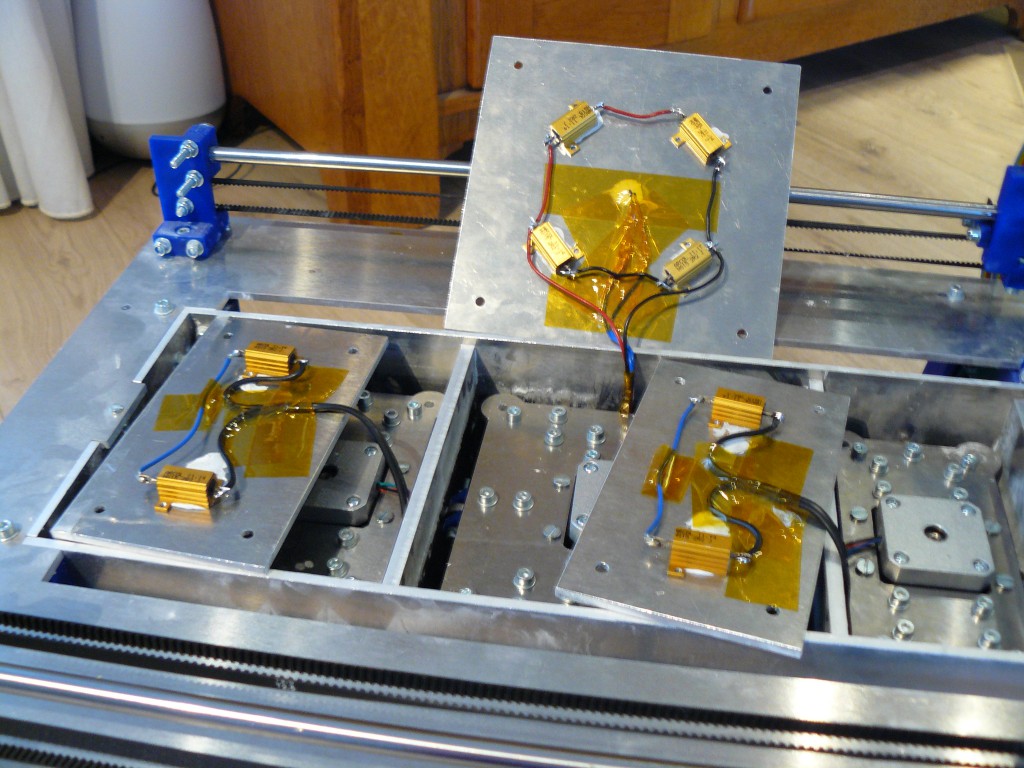 The boost circuit has two functions. First it boosts 12V from the printer to 20V the cartridges need. Secondly it converts the 4 input lines the Megatronics has to spare to the 12 lines needed for the cartridge. The circuit is based on Nicholas C. Lewis’ inkshield (http://nicholasclewis.com/projects/inkshield/).

An interesting point on the circuit is the enable (safety) connector. Early in the design I found that resetting the megatronics lead to the cartridge to uncontrollably firing. This destroyed a few of my cartridges. I added a safety line on a different port on the atmega to protect against these misfires, hoping that not both the Aux3 port and the enable port are high at the same time. It physically interrupts the 20V going to the cartridges. Thus far it has worked. Added bonus of this is that it is completely safe to change cartridges while the printer is not printing, there is no power on the cartridge. Because the megatronics has no open pins left, I had to design it so it could be driven from a heater mosfet (extruder 0). This mosfet supplies 12V and is sinking, so a relay was used to switch the enable (safety) on.

Additionally on the boost demultiplex circuit is the carriage (X) endstop. The ribbon cable running to the cartridge has 16 poles. The cartridge only requires 13 lines (12 nozzles and a supply). The endstop requires an additional 3 poles. If that is not divine intervention, I don’t know what is. At the circuit board at the cartridge, the 3 poles for the X endstop are connected to the endstop by a header. This way only one cable runs to the carriage. 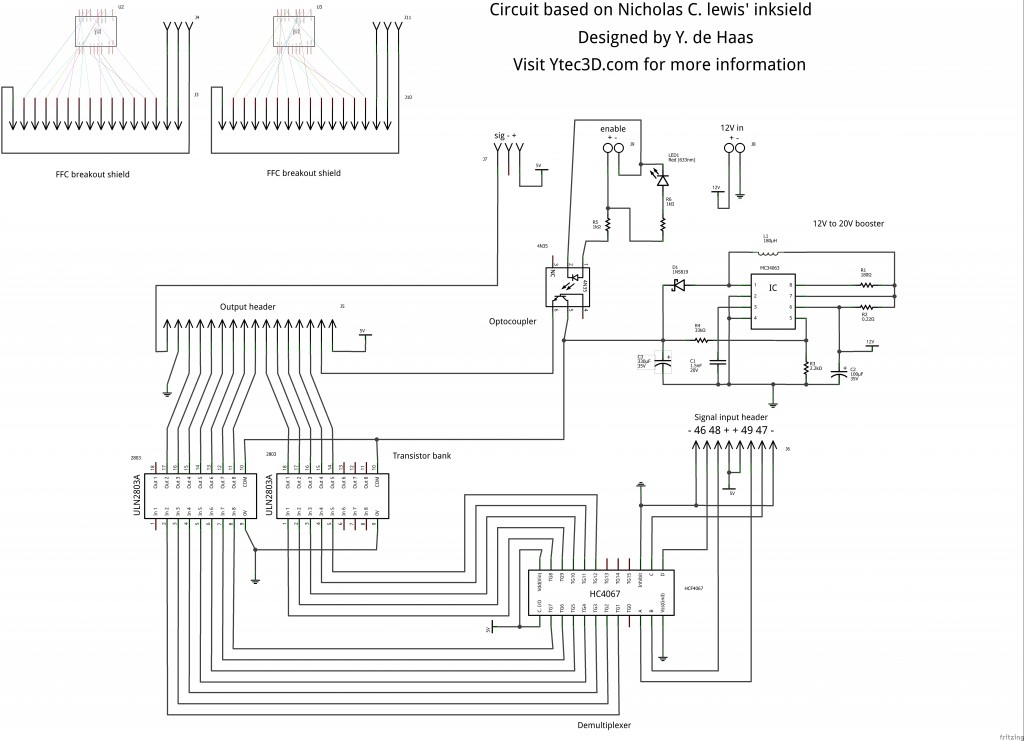 There are two varieties of the boost demultipexing circuit. The first version is the home made version. It is only a single sided PCB and can be made even with the most crude etching equipment anyone might have. It has a relay for the safety, and because of the diode protecting the relay, it is very important that the polarity is not reversed. The circuit on the cartridge’s side has a boxed header connecting the flatcable to the ribboncable. This header is not soldered through hole but is soldered on top of the circuit.

The second variety is the professionally made circuit. It is more compact and has no jumper wires. It used to have an optocoupler for safety, but this component did not expect as planned. A temporary fix needs to be made to fix it. This circuit has been ordered per 10, so the remaining boards will be for sale in the (soon to be) shop if they function properly. 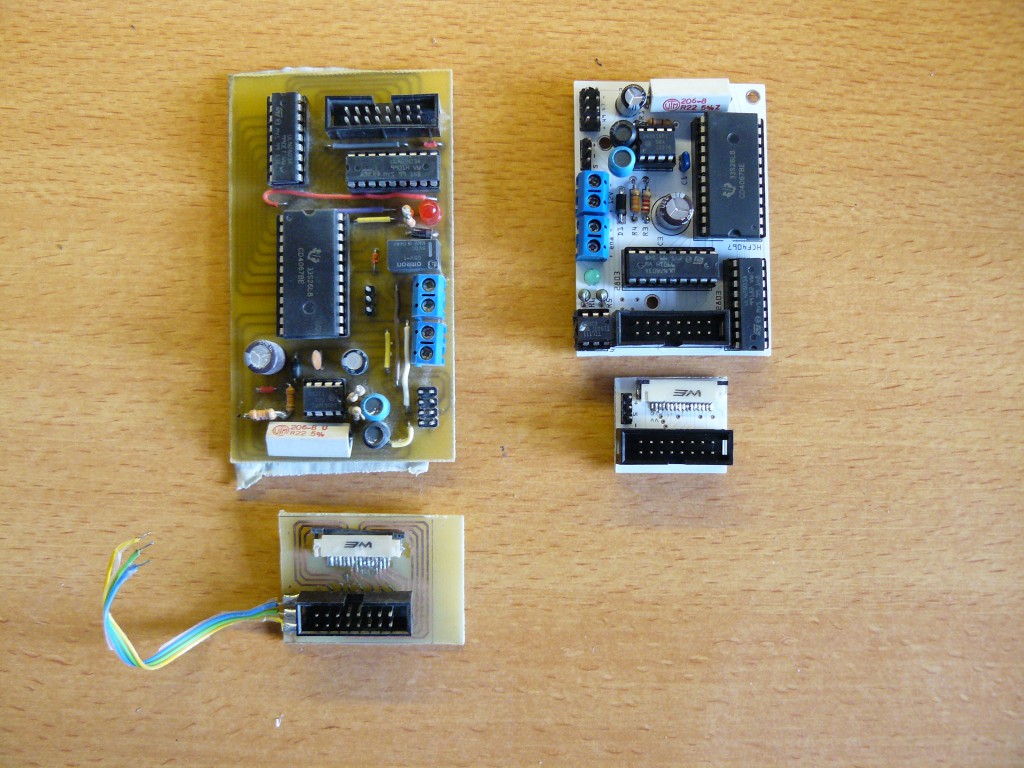 The circuits can be downloaded here:

Edit 7-12-2017: A mistake exists in the DIY circuit. The pad (circled red) intersects with a trace. When etching the circuit, this trace needs to be separated from the pad or one nozzle will not fire and be damaged on the driver circuit. Other fixes will not be made to this circuit anymore. 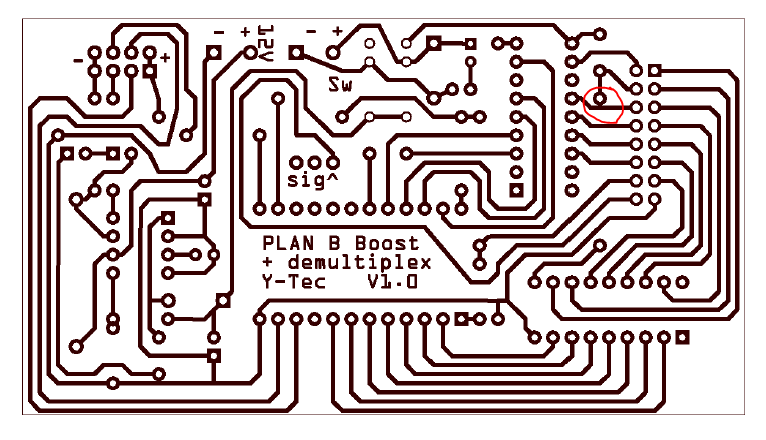 A fixing circuit needs to be made. It is soldered on a 6×7 island prototyping board. It contains 2 3×1 header to connect with the optocoupler IC foot, a miniature 12V relay and a diode to protect from voltage spikes, caused by the coil on the relay. Pictures and schematics are shown below.